Stanford Le Hope and Wickford branches of Cherrydown Vets are closed. Due to COVID-19, Basildon practice is physically open for urgent and emergency cases. All other assistance will be provided via telephone advice or video consultation, where available. To access this service please call us. Click here for further information.

Getting a new puppy should be a wonderful time. Sadly there are some unscrupulous breeders who are only out to make money and are not interested in the welfare of the animals. This is a real story of what happened when one of our clients got her pup Oscar. We have had to remove names and locations but the rest of the story is as Julie wrote it ………………… 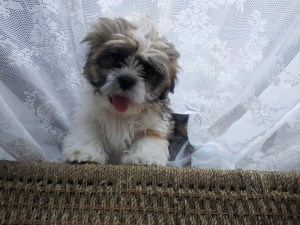 We first saw the advert for “Stunning shih Tzu Puppies – Boys and Girls”  in an online magazine advert. I was particularly interested as it advertised boys and girls , ready to leave mum , £350,  Kennel Club Registered, Wormed and Vaccinated

Most other Shihs are usually about £400+ if they are KC  registered so I telephoned to find out more as we wanted a male pup.

The lady  I phoned said that she was new to breeding, and that the pups were her own dogs babies and that it was the first time that she had done anything like this and it was going to break her heart to see them go. I asked about the KC papers and asked about the vet vaccinations. She said that all the paperwork would be provided when we went to view.

We arranged to go and see the pups the following Monday , but then she phoned back later that night and asked if we wanted to go on Thursday instead as there were only 2 dogs left.

I agreed , and arranged to visit at 7.30 on Thurs 31st Oct. We got stuck in traffic , we had to travel to get there, and she only gave her postcode , no door number…and the Breeder kept texting constantly – How long will you be , are you near … How far away are you … 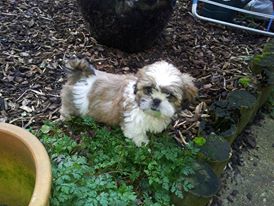 We text her when we arrived and she gave us the door number. It was in a block of flats. The flat was cold , the pups were gorgeous – fluffy – quiet – bloated. The lady explained that they had not long eaten and were sleepy. My husband noticed a room with a concrete floor with  lots of scraps of food all over it and the window open. There was no bedding and no sign of any of the Girl Pups either!!!

We picked our pup…we were kind of taken with him, we picked the quieter, as we had a quiet Shih at home already. We all went into the kitchen , she offered no toy or blanket material smelling of mum. I had brought my own , but she did not seem bothered to put it near the mum dog. Mum dog did not interact with the Pups at all, she seemed quiet and was scavenging round the floor.

I gave my name and address , for the Pet Plan insurance …Picked up the Folder with what I could see as lots of official looking papers and handed over £350. I didn’t  get a receipt, I did not even think about it, I just wanted to take Oscar home and I  felt uncomfortable.

I asked for some food for him , what was he eating. Oh ..Royal Canin she said , and bought out an empty “Adult” packet of Royal Canin

The door went, and it was some other people coming to look at another puppy. I wrapped Oscar up in our blanket (which i had rubbed all over the mum dog) and we left.  Both my husband and son remarked how cold the flat was, and how cold the lady seemed, no emotion at the pup leaving. 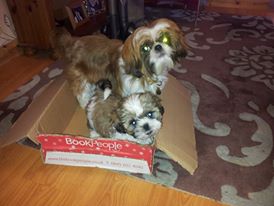 We got Oscar home, he was so bloated  that he could not walk. He was crying and whimpering, as if he had a tummy ache. He was crying all night, the blanket did not help him and he moved away from it every time we put it near him. He tried to suckle from our other male Shih tzu and he did not want to drink and seemed constipated. I stayed up with him nearly all night , he did not want to be held, he just lay on our cold wood floor.

Next morning , he was still seemingly in pain , he pooed and it was full of worms …he was so bloated and cried when pooing. His nose was running, he was sneezing and he was struggling to breathe so I phoned Cherrydown. I  phoned the Breeder and she seemed slightly concerned and asked to be kept informed. I told her he was so bloated and  I was worried about that  and  she said  “oh, just give him a Drontal tablet, he is due one on Monday.

After Oscar became ill with pnuemonia we found out he had never been vaccinated or wormed. His papers and birth certificate I got from the breeder all turned out to be fake. I telephoned the Kennel Club and they confirmed that they had never heard of the breeder or the pups, and it was then that we realised that in fact he was about 6 weeks old we think.

The breeder gave me a false vets name, I followed the details up, and found that it was all lies. In the meantime Oscar became more and more ill and passed it on to our other Shih Tzu, Buddy

Looking back – a cold house, no bedding for dogs, no interaction between mum and pups, so it probably wasnt even her pup, bad food advice, all documents fake, no door number given until we arrived at location, no trace of the pups at the vets where they were allegedly vaccinated. Petplan was in place, but she said we bought him on the 7th November when we in fact  bought him on 31st October. No receipt given , all doors in the flat shut, only allowed in the hallway and kitchen, bad advice about the worming and drontal tablet , I knew then that she was a fake.

I informed the Trading Standards and RSPCA  and they have visited the breeder. The flat is clear of all animals  and the guy who answered the door said that he did not keep animals. I did take a photo of Oscar outside the flat on my phone so have that as proof of where we got him.

Coincidentally one week later one of my friends was getting a puppy as well.  She travelled to a house in a street and she too was not given the house number just the postcode.

She was met by a child, who directed her to a long driveway , where she entered the house, viewed some puppies and bought a little girl pup that was approx 7 weeks old – infact , she was the main pic on the advert that we had seen when we were looking for Oscar …..

There was the same thing with my friend – no interaction with mum and pups, no receipt, fake papers  and according to her birth certificate Poppy was born a week later than Oscar to the same mum and dad as Oscar. Poppy has been unwell but we are lucky  as the RSPCA have told us that 2 other of the pups have died. 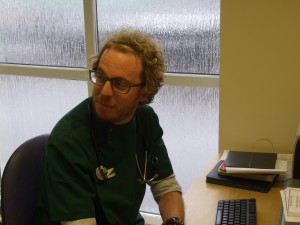 Oscar is still poorly, and Cherrydown’s “Curly Kev” (Kevin Wood) has been amazing. He has shown care and compassion with both my two dogs and they love him. I don’t think Oscar had ever been held or handled before and its taken a while. He will need a nasal operation to help his breathing, as i’m still giving him steam inhalation and nebulisers, he has a weak chest too and will probably suffer in the future.

The RSPCA say that the pups were shipped in to England.  We are lucky that they are now healthy(ish) and happy. Looking back I cannot believe that I let all these things slip by me, and feel guilty that I should have noticed earlier what kind of things were going on, but it seems I was besotted with our new pup and completely oblivious to all the errors being made.

As Julie says in her story, hindsight is a wonderful thing, but it is easy to get caught up in the emotion when getting a new puppy and unscrupulous breeders count on this. We have put together a FREE guide to getting a puppy which you can download by clicking HERE. It also contains special offer vouchers which can save you money.  With our puppy package your pup can get :

Alternatively, if you know someone who is getting a puppy and might find our guide and offers useful please pass on the link to our website so they can download their own copy

Also, if you have a friend who is getting a puppy, refer them to us and if they take advantage of the £30 puppy package you will get £10 credit added to your Cherrydown account. You can download a referral form by clicking HERE 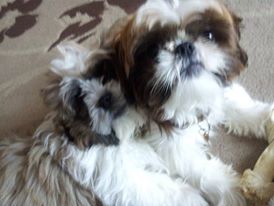