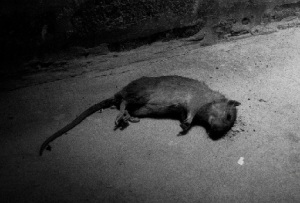 Dogs and rats really are on the opposite end of the animal spectrum. While dogs are considered to be ‘man’s best friend’ and treated like a member of the family, rats, on the whole, are resigned to living in the gutter and feeding off rubbish. I know rats played a pretty big role in spreading the bubonic plague which killed over seventy million people about seven hundred years ago, but is it not about time for us to forgive and forget? Apparently not, because rat poison is readily available in many high street shops. So it looks like our opinions of rats are not going be changing any time soon, despite Disney’s best efforts!

The problem is, the kind of places that you put rat poison are the kind of places your pet, specifically your dog, will find it. Most people, as you might expect, leave rat poison at ground level, whether in the house or the garage. And let’s be honest, dogs are not exactly too picky when they spy what they think is a treat that they can help themselves to. But poison is created to cause harm and while rats are much smaller animals than dogs, it can have a serious effect on dogs if they mistakenly eat it or a rodent that died as a result of eating the poison. We’re going to get a bit technical here so bear with me. The poisoning occurs when the dog is exposed to a substance known as bromethalin, a toxic chemical found in most rat poisons.

Ingesting bromethalin can lead to a variety of health related problems in a dog, with the most serious being internal bleeding which can of course be fatal. There are a wide range of symptoms to look out for, although they may take three or four days to show up. Some of the most common symptoms include loss of appetite, fatigue, weakness, breathing difficulty and seizures. There are a variety of treatments available to vets. Vomiting can be induced to decontaminate the dog’s digestive tract and charcoal can be administered to clear the dog’s bowels. Vitamin K can also be administered as rat poisons remove it from the dog’s body which means the dog’s blood cannot clot properly.

The most important thing to remember is to make sure you get your pet to your local veterinary surgery as quickly as possible as time can be key when it comes to treating this type of poisoning. If caught early enough, treatment can be successful. But the best way to make sure your pet does not suffer from poisoning is to be extra vigilant when you put the poison down. Try to fence off the area where the poison has been placed or just keep a closer eye on where your dog is while it is there. As they say, prevention is the best cure.