Lexi is an 8 year old Cavalier King Charles and on Thursday evening she was out enjoying the sunshine playing in the garden. All of a sudden she spotted something and being playful and inquisitive she went to investigate. Unfortunately what she had seen was a snake and she wasn’t aware of the dangers. The snake reared up and went for her. Her owners saw the snake attack but didn’t realise she had been bitten. They got Lexi away and took a photo of the snake. Lexi’s face began to swell and they realised she must have been bitten and rushed her in to see us. She was seen as an emergency by our duty vet Josh Aldred at around 6.30pm.

Snake bites can be nasty but most aren’t fatal in the UK. The good news about snakes is that we only have one native venomous species in the UK – the Adder (Vipera berus). Even better news is that they’re largely elusive creatures who are about as keen on running into you as you are of running into them.

The bad news is that if anything is likely to sniff them out it’s your inquisitive best friend.

Before we go on, it’s important to stress that snakes shouldn’t be feared; (a large amount of respect doesn’t go amiss of course); they have a role in the ecosystem, and the chances are you’ve probably walked past scores of them without knowing. It’s also worth noting that the native British Adder’s numbers are dwindling, hence there are a number of breeding programmes around the country. 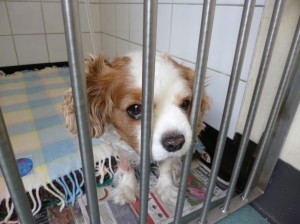 Josh assessed Lexi and could see her face was swollen. Initial treatment was supportive with fluids, antibiotics and anti inflammatories. Her heart was checked and she was closely monitored. She improved well over night and was happy to eat. Sometimes we give anti-venom but it wasn’t considered necessary in this case.

By Friday morning the swelling had started to go down  and Lexi was more comfortable. The signs are good that Lexi should make a good recovery but her owners will be keeping a close eye on her at home for the next few days.

Now, short of curbing your dog’s natural instinct to explore in hedgerows, forests and fields some knowledge of what to look for and what to do will come in handy.

If your dog is bitten he or she will let you know. If you hear a yelp, check them over. You’re looking for two puncture marks about an inch apart. Of course with long haired dogs this is easier said than done.

Facts to bear in mind

*We see an average of one suspected snake bite a week during Spring and Summer.

*High risk times are sunny days when the adders like to bask.

*Classical signs of a suspect bite is a sudden onset and unexplained swelling.

*It goes without saying the experience is painful.

*Sometimes fang bites are evident but not always. They’re often found on the face where the dog investigates, but we also see a lot of bites on the leg area causing acute swelling and lameness.

*The major short term risk is anaphylactic shock and swelling around the head and neck which causes breathing difficulties. Rapid treatment with iv fluids and possibly antivenom is needed. In the longer term, the snake bite toxin can cause local tissue necrosis (death) resulting in very serious infections and sloughing of tissue (bits falling off) leaving very large wounds that need surgical reconstruction.

*The dose of toxin compared to the size of the animal often determines whether the bite is fatal. i.e a baby adder biting a rottweiler is less risky than an adult adder biting a jack russel or a cat. Most of the time we have no idea at the time of treatment the dose of venom given.

*Human antivenom is available but some dogs can have an allergic reaction to this.We decide on a case by case basis when to use it

*Bites to the head and neck area are more dangerous than limb bites.

*Finally, there is some evidence that in rare cases head bites can cause behavioural changes in dogs possibly due to venom effects on the brain.

*Cats are less likely to encounter snakes as they’re less inquisitive, but due to the venom to weight ratio, bites to a cat should be considered even more serious.

As always if you suspect your dog has been bitten, treat it as an emergency and contact us immediately. Do not attempt to apply a tourniquet or to try and suck out the venom. Well-intentioned first aid attempts can make matters worse.

If you’re after more information on the Adder, this BBC article makes for interesting reading.