Maisie Oliver came in to us on 23rd November. Here is her story. 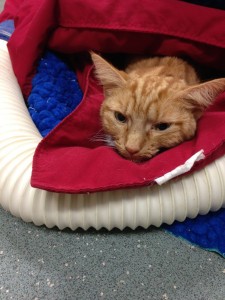 Maisie, an 18 month old cat, was brought in by her owner because she wasn’t eating very well and it was initally thought that her brother was bullying her from her food. Hayley examined her and felt a soft mass in her belly, which felt a little bit like a furball, and so gave her some katalax to help move it along, the owner would separate the two cats during feeding and she would come back in 2 weeks for a check.

Kim saw her because she still wasn’t eating and on examination, the mass had become very hard and felt approximately 20cm long and 5 cm diameter and she had lost 400g – dropping from 2.5 kg, to only 2.1kg – very underweight for her size! A scan was performed which confirmed the mass was within the small intestines and the decision was made to open her up immediately. She was very weak and there were risks associated with the surgery but without it, she would die. She was placed on a drip, given a strong pain killer and anaesthetised. On opening her abdomen, a part of the small intestine was seen to contain a foreign body and were massively distended beyond their normal size. The intestine was opened up and impacted straw, wood chip and grass was found within. It was so hard, the material would not come out as a single entity and had to be manually broken down intra-operatively. The intestines were sutured closed, the rest of the abdomen was explored but, thankfully, there were no other obstructions identified. 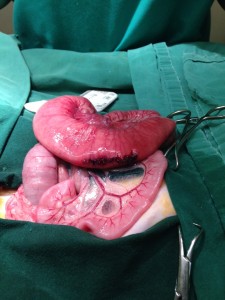 Maisie recovered very quickly from her surgery and wanted food within 20 minutes of waking up to make up for lost time! Danielle and Megan, our nurses on duty that day, cared for her, keeping her warm, feeding her littke and often and giving her lots of cuddles. She was able to go home next day and is doing well.

It is unusual to find this type of material in a cat and it may have occurred due to a behavioural compulsion to eat strange objects but can also be seen in cats with inflammatory bowel diseases, so with dietary modification, and the owner keeping a close watch on her, we hope she will not try to do the same thing again. Due to the nature of cats spending so much of their time outside, Maisie was never seen to have any vomiting or diarrhoea, however, these are often noted in an animal with an intestinal obstruction, in addition to weight loss and loss of appetite.

One of the pictures shows Maisie all wrapped up nice & warm in the ‘bear hugger’ recovering after her operation. The other shows her intestines and you can see how distended one is.