Lola Newton – a good news story of a pup we treated in September 2013 with Parvovirus.

Her owners story by Hayley Newton…………….

I woke up on the Saturday and realised Lola wasn’t her normal self. My boyfriend was put on dog watch during the day keeping me updated on how she was. He phoned me at 1pm on the Saturday worried that she was still not herself. That is when I made the phone call to Cherrydown vets. I spoke to Sarah Lacey told her Lolas symptoms and she made the call that she needed to come in. If Sarah hadn’t of recommended Lola to come in she probably wouldn’t be here today. 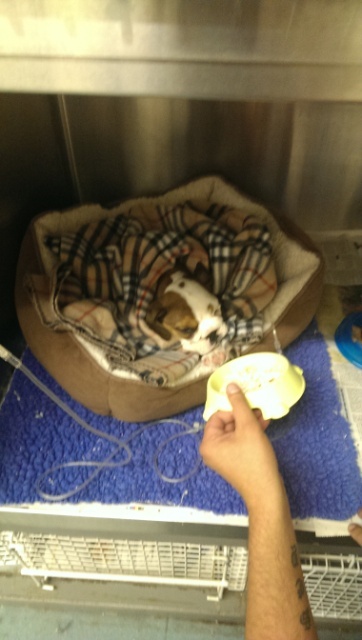 I came into the clinic with Lola and met Chris the vet. He was very worried about Lola as she is only a puppy and she wasn’t acting how a normal puppy should. He gave her a thorough look over and decided she needed to stay in for further tests.

At every point through the diagnostic stage I was informed by Chris. Even when Chris went on annual leave he told me that Jonathan was now going to look after Lola.

Lola was treated like a baby and everyone soon fell in love with her. It was like a roller-coaster ride one moment she was up then rapidly spiralled downhill. The one phone call I dreaded was made by Jonathan asking me what he wanted me to do with Lola as she was really poorly. He suggested that we could carry on with the treatment as she wasn’t in pain or I could end the treatment. I couldn’t give up on Lola at this stage and my boyfriend was still hopeful that she would get better. My boyfriend made the decision to carry on with the treatment and little did we know at that point that it was the right thing to do.

Joanne Barnes the new receptionist got very attached to Lola and made a fuss of her at every opportunity. The other veterinary nurses also made Lola feel important and loved. The smallest improvement that Lola made we were informed. The nurses got excited when Lola ate the smallest piece of white fish!!

The diagnosis soon came through and Lola had got parva. Where she is still so young, Jonathan, was unsure what damage may have been caused internally.

She soon became one of the Cherrydown family and when it was time for her to come home it was the best phone call that we could have got.

We would both like to say a massive thank you to all of the team at Cherrydown vets for saving our Lolas life and not giving up on her. She is now a happy little lively puppy and is doing better each day.

Lola presented to Cherrydown Vets Limited as an emergency on Saturday afternoon. Christopher Mortemore was duty vet The owners had noted that she was very quiet and off her food. Lola had not been vomiting or passing diarrhoea. 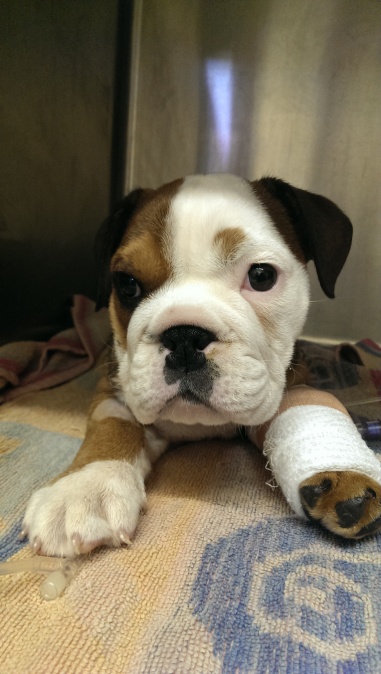 Although Lola’s symptoms were vague, Chris was very concerned about her. Therefore, he admitted her for 24 hour observation and ran some initial diagnostic tests. He also put her on an IV drip as she was not eating and drinking. X-rays on Saturday evening revealed slightly a slightly gassy abdomen and Chris was concerned that this may indicate a gut obstruction, although the signs were not typical. To be on the safe side, he emailed the images to senior vet Jonathan. He was happy there was no obstruction visible on the X-rays and advised Chris that supportive care was the best way to go until further symptoms became evident.  During the initial 24 hours in hospital Lola deteriorated. She started vomiting and passing bloody diarrhoea. Faecal samples were collected but, as Lola had been fully vaccinated, parvovirus was not considered the most likely diagnosis.

Despite strong drugs to stop her vomiting, Lola continued to struggle. She was under intensive 24hour monitoring and the nurses worked tirelessly to look after her. Even though she was vomiting we had to get nutrition inside her as she was so young.So every couple of hours she was syringe fed small amounts of high energy liquid food. She was on constant IV fluids, a multitude of different drugs and regular monitoring blood tests to check her electrolyte levels. During the next two days Lola’s condition failed to improve and the prognosis became worse by the day. On Tuesday morning, the decision was taken by Jonathan to add in additional drugs that we would not usually use for puppies due to the risks but at this stage we had nothing to lose.  Later on Tuesday, the faecal results arrived and the diagnosis of Parvovirus with secondary coccidiosis was confirmed. The diagnosis surprised everyone. There was nothing additional that could be given at this stage and all everybody could do was hope and continue the intensive supportive care

Suddenly by Wednesday, Lola started to improve. Her vomiting stopped and she even started showing interest in food. Thankfully, her recovery then gathered pace and , although the prognosis was still guarded, medications could slowly be stopped. By the following weekend she was on oral medication only and was able to be discharged one week after admittance. She continues to make excellent progress especially her singing voice that she perfected on her last couple of days in hospital!