It’s been a while since we wrote a blog about cats and after seeing how much interest was shown in one of our patients recently we thought we would write a blog about the breed.

Blue,(pictured below) a Maine Coon, came in to see us. He was very popular in the clinic and when we shared the pictures on our Facebook page we had lots of comments and interaction.  It’s not often people see a cat like this so it always attracts attention 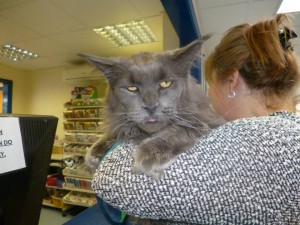 Maine Coons are also known as the American Longhair.  It’s a breed of cat that has a distinctive look and is one the oldest breeds in North America, specifically native to the state of Maine.  The origins of the cat are not known but there are many theories. One theory suggests Marie Antoinette, the Queen of France, tried to escape to America and amongst her prize possessions she took her Turkish Angora cats.   Unfortunately Marie Antoinette never made the journey but her cats did.  They arrived in Maine, America and bred with other short haired breeds.

Maine Coons are big cats and have the nicknamed “gentle giant”.  Even though they are bigger than the average cat they are still as playful and inquisitive.  Maine Coon Cats are intelligent, trainable, described as “dog like”. They will offer you hours of enjoyment with their antics but can at times be intrusive. Without question they want to be part of everything and your privacy may require a closed door between you and your cat. Most Maine Coon Cats have a fondness of water, to be in it, watch it, wash their food in it, or just plain play in it, so don’t be surprised if you have an uninvited guest in your shower or help with washing the dishes.

Healthwise these cats are a pretty hardy breed. However, as in many cats, there could be potential issues such as